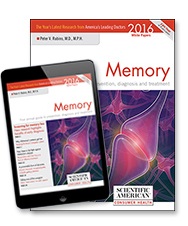 The following article has been taken, in full, from Scientific American: http://www.healthafter50.com/alerts/memory/Feed-Your-Brain-With-MIND-Diet_7653-1.html

“Question: What do you get when you mix two well-established, healthful diets and sprinkle in a pinch of ingredients known to slow or reduce the risk of cognitive decline? Answer: The MIND (Mediterranean-DASH Intervention for Neurodegenerative Delay) diet, a dietary eating plan that seems to yield a significant decrease in the risk for Alzheimer’s disease and other forms of dementia.

It suggests avoiding or limiting food from five other groups:

The MIND diet is a hybrid of the heart-healthy Mediterranean and DASH (Dietary Approaches to Stop Hyperten- sion) but with modifications to place more emphasis on foods and nutrients shown in scientific literature to boost brain health. All three diets promote natural plant-based foods and limited intake of red meat and foods high in saturated fats.

The diet is the brainchild of researchers at Rush University Medical Center in Chicago. After laying the groundwork with select ingredients from the Mediterranean and DASH eating plans, the researchers designed the diet to include foods with the most compelling evidence for slowing decline in mental abilities and preventing dementia. As a result, older adults who followed the MIND diet most rigorously were the equivalent of being 7.5 years younger cognitively than those who followed the diet least.

Both the Mediterranean and DASH diets are known for their protective cardiovascular benefits, such as lowering the risk of high blood pressure, heart attack and stroke. They’ve also been linked to protective effects against age-related cognitive decline. Both ways of eating promote healthy blood vessels, which means improved blood flow to the brain and better cognitive function. By contrast, reduced blood flow through arteries clogged with plaque can lead to changes in the brain that can impair memory and thinking.

Additionally, a growing body of scientific evidence suggests that high vegetable consumption—similar to that in the Mediterranean and DASH diets—is associated with slower cognitive decline. Researchers have observed the strongest links with vegetables such as spinach and kale that contain high levels of the B vitamin folate, vitamin E, carotenoids and flavonoids.

Considerable research supports the neuroprotective properties of vitamin E, found in vegetable oils, nuts and whole grains. Additionally, berries have been shown to improve memory and learning, while studies on fish consumption have shown a lower risk of dementia with just one serving (about 3 to 4 ounces) a week—although no evidence shows added gains from eating more servings.

Unlike the Mediterranean and DASH eating plans, the MIND diet doesn’t include high fruit, dairy, potato or fish consumption because research shows minimal or no additional brain benefits for increased intake of those foods. Berries are the only fruit specified on the MIND diet because they have the best data linking them to cognitive health.

The Rush researchers published their MIND diet findings in the September 2015 issue of Alzheimer’s & Dementia. They evaluated the documented eating habits of 923 older men and women (average age, 81) who had no signs of dementia at the start of the study. They noted how often the participants ate from different food groups over four and a half years. After accounting for dementia risk factors such as depression and obesity, the researchers discovered that:

As the researchers point out, the observational nature of the research precludes proving a causal association between diet and cognitive function. Additionally, the study population was composed of mostly white subjects, so further research needs to include other ethnicities. The study authors expect the diet to be modified and refined with additional research.

Fittingly, figuring out how to incorporate the MIND diet into your everyday life is pretty much a no-brainer: U.S. News & World Report ranked it number one on its 2016 list of easiest diets to follow. The good news is that you don’t have to count calories, and while some foods are limited, nothing is eliminated.

You’ll benefit the most from the MIND diet by eating at least three servings of whole grains a day, a green leafy vegetable and one other vegetable every day, a handful of nuts most days, beans every other day or so, poultry and berries at least twice a week and fish at least once a week. You can complement a meal once a day with a glass of wine, but if you don’t already drink, don’t start.

Avoid or limit intake of sweets and pastries (less than five times a week), butter and stick margarine (less than one tablespoon a day), whole-fat cheese and fried or fast food (no more than once a week) to increase your chance of avoiding the devastating effects of Alzheimer’s.

You’ll serve your mind well by making the MIND diet a permanent part of your lifestyle—even moderately following its basic tenets can yield protective effects.”